Ben Gordon, also known as Houston’s Jewelry Judge, was the featured speaker at ‘Lunch with Friends,” at The Village of Meyerland this week. During his talk, “What’s in Your Jewelry Box?” his audience asked questions pertinent to their estate planning concerns.

Many audience members were frequent travelers and wanted to know about safe jewelry shopping when cruising. Others were considering selling the jewelry they have acquired over the years. Some mentioned that their children and grandchildren were not interested in inheriting their jewelry. When grandchildren are graduating with tens, if not hundreds, of thousands of dollars in debt and parents have mortgaged the house to pay for tuition, this is not surprising.

The most frequently expressed concern was “How to avoid family conflict among heirs?” Mr. Gordon demonstrated how bickering could be avoided by having values of expensive jewelry items readily at hand to settle disputes. “Either you plan now or your heirs will need to settle disputes later,” Mr. Gordon affirmed. He encourages acting now, so heirs are not encumbered in the future.

One thing all the Seniors have in common is ‘vulnerability;’ knowing who to trust or where to turn when valuing or selling an expensive item. Mr. Gordon observed that he often provides a ‘second opinion,’ to reassure that an offer to buy is fair. “It’s always a good idea to Trust but Verify,” he advises.  “In their younger years, he commented, our clients were interested in protecting their fine jewelry from loss or theft. They came to us for insurance appraisals. Now, Baby Boomers, come for valuations for estate planning or, in some cases, even selling jewelry to meet current expenses.”
As a Master Graduate Gemologist and independent appraiser, Mr. Gordon does not buy or sell. This enables him to remain objective, basing his fine jewelry and watch valuations on facts. If a client wants to sell an item, he has a network of reliable sources to contact. This speaking engagement is part of The Jewelry Judge’s commitment to consumer education and public awareness. 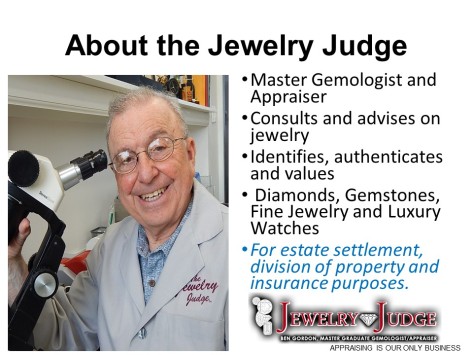