2017 Pearl Update – Know What You Have – Get a Jewelry Judge Consultation Today!

Freshwater pearl farming was initially started in Japan in the 1930’s, but today China is the biggest commercial producer of freshwater pearls.  Fine quality Chinese Freshwater pearls are growing in the gem trade.  Chinese freshwater pearls have earned widespread consumer appeal thanks to the many varieties, shapes, colors and styles. Per strand prices in the hundreds and even thousands of dollars are not unusual. 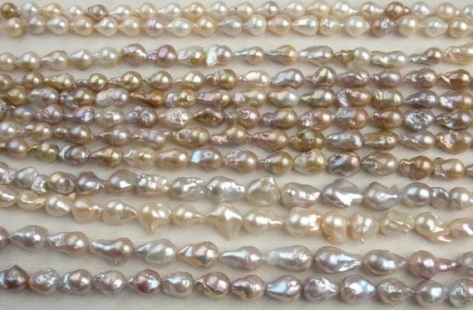 There are mainly two different types of farmed pearls, tissue nucleated and bead nucleated.  Nucleation is the process of growing cultured pearls by inserting a foreign object, the nucleus, into the mollusk.  The mollusk covers the nucleus with nacre until a pearl is formed.  The nucleus can be a bead or a piece of mantle tissue from another mollusk shell.  Beads provide a larger more uniform pearl in less time for the farmers.

The biggest sellers in the freshwater market are Edison pearls, which are bead nucleated, big and round. Fine and extra fine pearls command the highest prices because they are popular with buyers, large sizes ranging from 12mm to 20mm, and for their smooth surface, excellent luster and vivid colors of white, peach, pink, gold, metallic, plum, and aubergine-purple.

Buyers need to be aware of increases of pearl farming labor costs. Small Chinese Freshwater Cultured pearls under 3.5mm reflect a 20% to 40% increase in 2017. Note that these stronger prices reflect the finest quality freshwater pearls.

Over production of freshwater pearls in China has caused large inventories and lower prices for average quality and dyed pearls.

There were plenty of strands in Tucson available in 10mm to 11mm rounds for $25-$45 per strand (unstrung) wholesale.  While average to below average quality, these were still amazingly low prices. Fine and extra fine pearls were far less common and much more expensive.