Gentlemen Beware of the Koh-i-Noor Diamond

Like the Hope Diamond, the 105.6-carat Koh-i-Noor diamond is believed to have been extracted from the Kollur mine in Golconda, India.  Koh-i-Noor in Persian means “mountain of light.”

Mentioned in the memoirs of Zahiruddin Muhammad Babur, the founder of the Mughal Empire in India.  Babur wrote that the Koh-i-Noor diamond was stolen from the Rajah of Malwa in 1306, and that it was originally 739 carats in uncut form.

Throughout history, the gem traded hands among various Hindu, Mongolian, Persian, Afghan and Sikh rulers, who fought bitter and bloody battles to own it.  According to legend, a Hindu description of the Koh-i-Noor warns that “he who owns this diamond will own the world, but will also know all its misfortunes.  Only God or woman can wear it with impunity.”

The diamond was obtained by the British in 1849 and given to Queen Victoria in 1850.  To heed its legend, the diamond has since only been worn by women, including Queen Alexandra of Denmark, Queen Mary of Teck and the late Queen Elizabeth, The Queen Mother, wife of King George VI.

Currently, it is set as one of the jewels within a British monarchy crown that is kept at
the Tower of London Jewel House.  The fight to possess the Koh-i-Noor continues as India
has repeatedly tried unsuccessfully to lobby for return of the diamond.  According to British Prime Minister David Cameron, the British government owns the gem fair and square.

Jewelry Judge Ben Gordon provides appraisal and consultation services, either at our Gem Lab or at your home and your jewelry never leaves your sight.  We want you to watch and ask questions during the entire process. 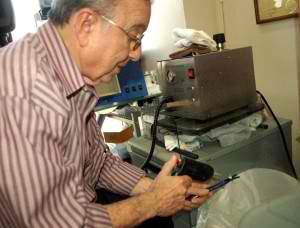